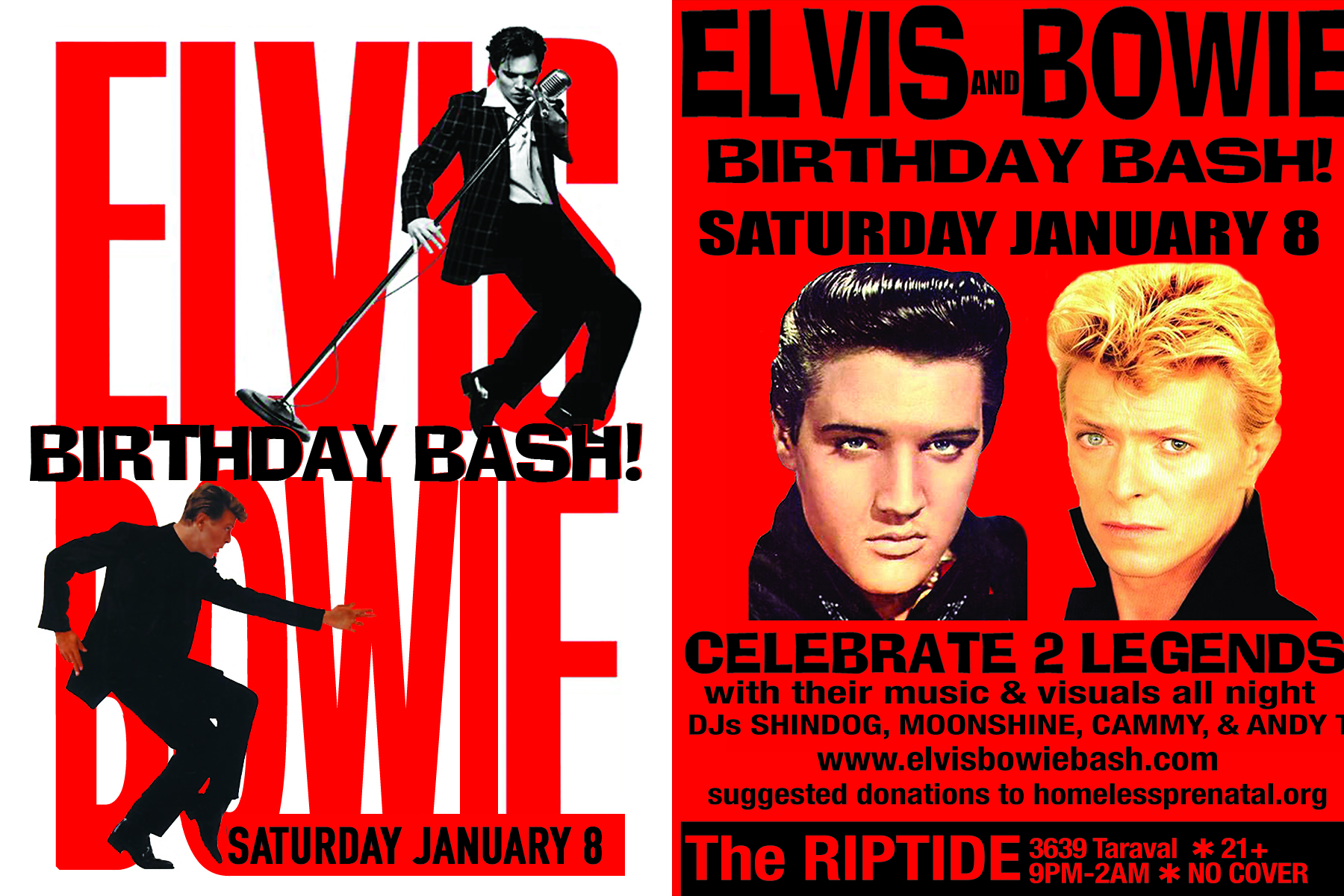 Click for FREE registration
Celebrate 2 legends with their music and visuals all night. DJs playing all David Bowie and Elvis Presley: Shindog (New Wave City), with Cammy, Moonshine, Andy T.  Here's a chance for fans of either or both acts to celebrate their music, personas, and lives.  The annual Bowie & Elvis Birthday Bash returns in its 10th year, and uniquely among other events, presents the music, image and legend of these two iconic artists who each changed popular culture as none other, and now are both no longer with us. Hear the music of Bowie and Elvis, both their best known songs, and rare tracks. Watch video performances, and visuals chronicling their careers and lives. From Modern Love to a hunka hunka Burning Love, from Flaming Star to Ziggy Stardust, from Good Rockin’ Tonight to Rock ‘n Roll Suicide, the Bowie & Elvis Birthday Bash has it all. The “Bash” began in 2001 in San Francisco, founded by DJ Shindog of New Wave City, and Spig of CostumeParty, launched at the Edinburgh Castle Pub, and later moved to Milk Bar on Haight Street. DJs play music exclusively made by the two honorees, and big screen video shows their still and moving images. Resident DJs joining Shindog are Cammy, Andy T, & Moonshine. The “King of Rock and Roll” revolutionalized music with his 1955 debut, creating a unique uptempo, backbeat-driven fusion of country music and rhythm and blues, presented in a sexually provocative performance style. He was a major star on record, film, TV, and concert stage over the next 20 years. He died in 1977 at the age of 42.   Rock’s ultimate chameleon was an innovator reinventing new music and visual styles for others to follow, including glam rock, plastic soul, cold synth-rock, eighties dance-pop, industrial and more. He was also an acclaimed actor, writer, producer, and early internet adapter. He died in 2016, two days after his 69th birthday, coinciding with the release of his final album. The 2016 Bash has held the night before the Thin White Duke passed away.
Subscribe to the Elvis Bowie email news
The Elvis Bowie Birthday Bash